The US Supreme Court is weighing in on the first RIAA file sharing case to reach its docket, requesting that the music labels’ litigation arm respond to a case testing the so-called “innocent infringer” defense to copyright infringement.

The case pending before the justices concerns a federal appeals court’s February decision ordering a university student to pay the Recording Industry Association of America $27,750—or $750 a track—for file-sharing 37 songs when she was a high school cheerleader. The appeals court decision reversed a Texas federal judge who, after concluding the youngster was an innocent infringer, ordered defendant Whitney Harper to pay $7,400—or $200 per song. That’s an amount well below the standard $750 fine required under the Copyright act.
Supreme Court could take its first RIAA file-sharing case
Posted by Unknown at 11:26 PM 2 comments:

An American woman told to pay $2m for sharing 24 songs over the internet has had her fine slashed.

Following an appeal, Jammie Thomas-Rasset has now been ordered to pay the Recording Industry Association of America (RIAA) $54,000.

The judge who reduced the fine said the original multi-million dollar claim by the industry was "monstrous".
Bravewords.com > News > Woman Charged In File-Sharing AEROSMITH, DEF LEPPARD Songs Fined $54,000
All I can say is.....It's about fucking time!!
Posted by Unknown at 8:07 AM 1 comment:

Ballmer Prove's CEO's Have a Sense of Humour! 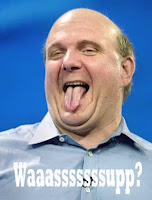 "I thought this Steve Ballmer autograph on a Macbook Pro was fake, but according to the following video of the big man scribbling it on a student's computer at Trevecca Nazarene University in Nashville, it's not".
I found it ironic that Ballmer wrote "Need a new one?" with a question mark. It's like he was unsure if replacing it was a good idea or not. I think maybe Ballmer is a closet Apple fanboy! I'll give him credit for being such a good sport and laughing about it. See, CEO's have a sense of humour too....
Ballmer desecrates MacBook Pro | Crave - CNET
Posted by Unknown at 1:08 PM No comments:

The Radiation Boom - Is It Killing Us?

"As Scott Jerome-Parks lay dying, he clung to this wish: that his fatal radiation overdose — which left him deaf, struggling to see, unable to swallow, burned, with his teeth falling out, with ulcers in his mouth and throat, nauseated, in severe pain and finally unable to breathe — be studied and talked about publicly so that others might not have to live his nightmare." - (NY Times 01-24-10)
It's scary that nobody noticed the machine was generating three times the recommended dose of radiation for over a month. Even scarier is the increasing amounts of radiation we have been absorbing over the last 30 years.
Far be it from me to be critical about putting nasty shit in your body, but the people giving it to me damn well better know what they're doing. I generally try to resist any imaging unless it's absolutely necessary. Call me paranoid, but the idea of absorbing a "small, but safe" amount of radiation just doesn't sound like a good idea to me. I'm sure if I had cancer it would be a completely different story. As a general rule of thumb, I try absorb as little radiation as possible. Maybe I've just seen too many Hiroshima, Nagasaki and Cherynobyl pictures......
The Radiation Boom - Radiation Offers New Cures, and Ways to Do Harm - Series - NYTimes.com
Posted by Unknown at 12:56 PM No comments:

What kind of idiot bible thumper came up with the idea to stamp bible references on the base of rifle scopes? I'm not sure how someone could think this would in any way be respectful to god, the bible or our soldiers. The irony is unacceptable to any reasonably normal person. I just can't get my head around the thought process that went into this decision. Was it supposed to be somehow comforting to our soldiers? Did they think that they were spreading God's word? I'm baffled.....
Company offers to stop putting biblical references on military scopes
Posted by Unknown at 10:48 PM 1 comment:

On Friday the California Public Utilities Commission approved a new 500 Kilovolt transmission line from desert areas deep in southeastern California where numerous solar projects have been signed, to urban centers on the coast.

As originally submitted the line was to have also carried electrons from sunny Arizona deserts too, but the project is having to moving forward without its neighbor. Arizona officials were concerned their state could become an “energy farm” for California, using up Arizona’s resources and costing the state’s rate-payers.

Even just the California portion could help bring many of the backlog of solar projects in our desert onto the grid, now that there is the transmission that they need.

Read more of this story »

They could also build a couple of ginormous nuke plants out in the desert and connect them to the grid as well. Then they could do the same on the East Coast also. Let say in the Oneonta, NY area. You could connect New England, Metro NY, Philly and Metro DC all to the new nuke powered grid. They could store the waste onsite or blast it into deep space.... :)
Posted by Unknown at 11:07 PM No comments:

Should the US Continue to Back Israel? ...Part 2

SCROLL TO THE BOTTOM OF THIS PAGE TO VIEW ALL THE LATEST VMG GEAR!